The French school of harp playing is famous throughout the world.

French luthier Sebastien Érard’s (1752-1831) brilliant ingenuity paved the way for the functionality of the modern concert harp. In the eighteenth and nineteenth centuries, the harp rivalled the piano, and Sébastien Érard was a leading manufacturer of both instruments. One of the first in France to make grand pianos, his double-escapement action became a design adopted by all subsequent builders. It was the same with the harp. After more than a decade of painstaking research, Érard’s invention of the double-action harp in 1810 finally made it possible to play the pedal harp in all keys, without a dramatic change of playing technique. To this day, no harp maker, in or out of France, has surpassed the genius of Érard. 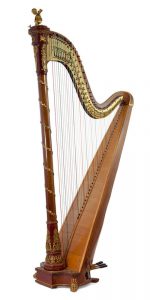 The original Erard Empire no. 3969, now in the Camac private collection

The Maison Érard operated in both Paris and in London, and remained active until 1959. Shortly afterwards, in 1972, Camac Harps was established as the next French harp maker.We are proud to continue the great traditions of French luthery, and have dedicated both our Vendôme and our Elysée concert harps to Érard’s famous Empire models. The Elysée’s gilded bronzes are cast directly from the original Érard Empire 3969, which is now in Camac’s private collection of historical instruments. They were cast by a French master craftsman who works for the national museums.

We continue to collaborate with the finest French artisans on the realization of our instruments.One example of this is the hand-carving of our Concert Grand harps by artist sculptor Jean- Bernard Jouteau. His latest creation – our Art Nouveau – is inspired by the “Belle Époque” between the 1880s and the First World War, when artists on both sides of the Atlantic went back to nature. Flowers, tendrils, leaves and lattices contributed to a style which, like ourcompany, turns its face to modernity. Our Canopée, another recent Concert Grand, is an inlaid tour de force by Jocelyne Réal. Réal, a “Meilleur Ouvrier de France” (“Master Craftsmanof France”) has made an original masterpiece for us, involving over five thousand individual pieces of sycamore, American walnut and mother-of-pearl.

Our harps are made entirely in France, with no reliance on outsourcing. We remain committed to domestic production, for reasons both of quality control, and social and environmental responsibility. In 2007, the French government declared Camac Harps to be an “Entreprise du Patrimoine Vivant” (Enterprise of Living Heritage). This is an award for companies who underpin the economic and cultural identity of France. 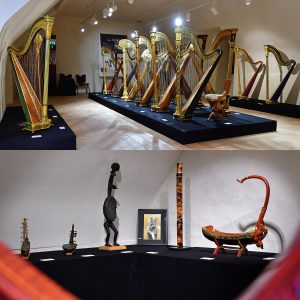 “From Marie-Antoinette to the Present: Treasures of the Camac Collection” is on display at the Château d’Ancenis, near the Camac ateliers. 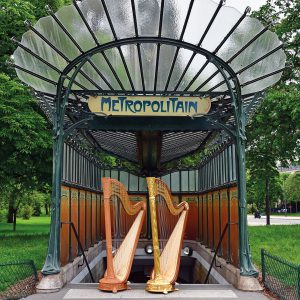